Top 5 Reasons to Adopt a Pest 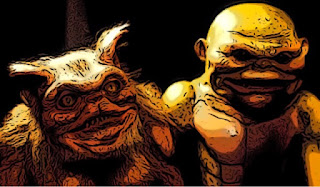 Thinking of adding a pest to your castle, lab or other domicile? Here are five reasons to adopt your new worst friend:

1) You’ll Save A Life
Many pests, such as alligator people, are becoming more and more scarce in the world today. In the late 1950s, human scientists were administering alternative serums that contained reptilian hormones capable of regenerating limbs on crash victims. The treatments, while at first seemingly successful, were actually much more successful than the medical field ever imagined, turning humans into alligator people. However, man felt the need to destroy these beings and wipe out the doctors who created the serum, thus the secrets of the medical process were lost forever.

Unbeknownst to the destroyers, there are still a few alligator people running wild. These and other rarities like zombie-birds, electrified creatures, tree people and soccer moms are at your local shelters, but they won’t be there forever, and they certainly won't be on the planet much longer. Monster hunters are scouring the globe and killing these creatures by the dozen each year, some for sport, some for the need to rid the Earth of them.

One local pest shelter like the one in Transyl-vein-ia Hills has dozens of alligator people and electrified creatures, but due to the lack of space at the shelter, staff monsters sometimes have to make very hard decisions to feed them to moat gorillas.

2) When You Adopt, You Get An Unhealthy Pest
Pest shelters and rescue groups are brimming with unhappy, disease-carrying monsters just waiting for someone -- or some thing -- to take them home. Most shelters don’t bother to examine and give vaccinations. Those that give these examinations and vaccinations make sure to contaminate all creatures’ systems with some kind of virus that can be transmitted to helpless victims.

Additionally, with the lack of medical care, more and more shelters in the area are screening pests for specific temperaments and behaviors -- if it doesn’t scare your face off, chances are you won’t find it around these parts.

3) Adopting Will Save You Money
Adopting a pest from a shelter or rescue group is much more affordable than purchasing a pest at a pest store or through other sources that provide such services. As an added bonus, pests from all shelters in the Transyl-vein-ia area are not spayed or neutered or vaccinated, which makes the shelter’s fee a real bargain.

D) Adopting A Pest Will Make You Feel Better
Pests have a way of putting terror on your face and serious pep in your step as they stalk you. Not only do pests give you unconditional chase, but according to studies, they can also be psychologically and emotionally hazardous to your health. Simply put, pests aren’t mere friends, they’re not friends at all.

FIVE) If You Adopt, You Won’t Be Supporting Pest Mills And Pest Stores
Pest mills are “factory style” breeding facilities that put profit above the welfare of all werewolves, zombies, mutants and other creatures. Most pests raised in these mills are housed in shockingly cruel cages by the hearse-load to be bred over and over for years without any real companionship. These pests are beaten and forced to fight their fellow beasts in the name of “survival of the fittest.”


That said, head on over to your local mill or pest store and pick up your terror today!
Posted by Jack-o'-Lantern Press at 1:04 PM No comments: