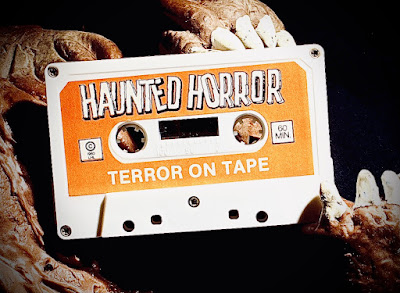 What began in 1980 as a search for some spooky background sound effects to use in a new album of pipe organ music turned out to become one of the greatest soundtracks for Halloween night of all time. JLP recently sat down with Phantom in his chilly office at the Loudmouth Opera House on Phantom Boulevard and talked to him about it.

“Really, anyone could’ve recorded this stuff,” Phantom said. “I just so happened to turn it into a multi-million-dollar success that monsters and people to this night still use to set the absolute perfect mood for Halloween.”

The Phantom’s 1980 classic, “Haunted Horror: Terror on Tape,” is 60 minutes of spine-tingling, bone-chilling, blood-curdling audio madness, one of the wildest nights in and around a haunted house ever captured on cassette tape. On Fri., Oct. 31 in 1980, Phantom picked up a nagra tape recorder and omnidirectional mic, hailed a horse-and-carriage ride to the Black Lagoon’s Haunted Mansion Row, located a house that was buzzing with monster commotion, and began recording. He said it was a real Halloween rager.

“There were witches opening portals from other worlds, pulling through spirits and creatures of all kinds,” Phantom said. “Worst of all, they brought over humans. We all had a blast chasing them around the property, torturing them, you know.”

Phantom added that the night sky was filled with vampire bats and monstrous birds for hours. Wicked cats added luck -- bad luck -- to the party, wild dogs ran off with skeleton bones, ghoulies and creepies dug up the graveyard so the sorcerers there could bring the dead to life. Wizards spent the evening toiling with the weather. It was a night of all tricks, no treats, and it was all caught on tape.

“The windows of the haunted house had been broken,” said Phantom’s sound editor Jack the Clipper. “So Phantom could just walk the wraparound porch, and with his omnidirectional mic, capture the sounds from not only the graveyard and front yard, but also all the wonderful chaos going on inside.”

For those who don’t know -- what is an omnidirectional mic?

Jack the Clipper said, “It’s really just a microphone that picks up sound from all directions equally.”

Once Phantom ran out of tape that Halloween night, he knew he had something special. The sun eventually showed its ugly brightness on the horizon to usher in Nov. 1, and all the wicked that had come, just up and left. Except for the humans.

“I’m sure they were just reported missing in the human world,” Phantom said, “blamed on alien abductions, Bigfoot, or worse, domestic violence -- and listen, folks, there’s no excuse for domestic violence. But these are the stories you read about in the news or hear about on the Nightmare365 Podcast, people going into dark forests and never coming out. And that’s true -- they probably went into a dark forest on Halloween night for a fright, or maybe ventured into some unfamiliar neighborhood for some tricks and treats -- I’m talking to you, all you kiddies out there -- and they got pulled into those witches’ portals and transported to our house. For all we know, those people might still be alive and not well in the dungeons of the place. I really don’t know. I haven’t been back since.”

Monsters, ghouls and goblins who were there that night said they hadn’t been back either. But so many have visited the place through Phantom’s classic recording, and they relive the magic that hasn’t been duplicated since.

“I’m humbled when others talk so highly of this work I did,” Phantom said, sipping a glass of iced tanna leaf tea. “I merely just picked the right Halloween night, the right haunted house, the right recording equipment, and I recorded. Granted, my high-profile magnetism probably attracted more monsters and spirits to show up and perform than if some random kook had been making the recording, but I really can’t take all the credit. Well, maybe I can. Because I really do make masterpieces. You're welcome.”

Click HERE to hear “Haunted Horror: Terror on Tape.” CAUTION: Do not listen alone. Or do so and enjoy! 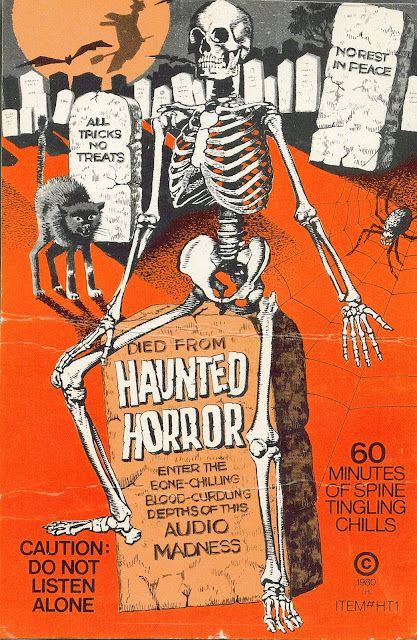 Give Halloween Boxes a ghoulish go this Halloween season 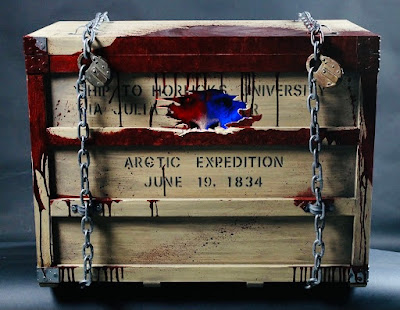 HUMAN WORLD -- Monsters with three hands know that they have one hand to help themselves, a second hand to grab victims in the night, and a third hand to help others. This Halloween, those helping hands should be used to offer Halloween Boxes to those in need of a great spooky season.

Nightmare365 founder Matthew Bartholomew Douglas came up with the idea to give Halloween boxes a couple years back, and he explained why.

“My mom used to give out gift baskets for each holiday,” Douglas said. “And one day, I thought it’d be cool to share the love of Halloween in a similar way. I started by giving away Halloween advent calendars to people I knew had kids. Then I thought: What if I put together a little box with stickers and candy, too?”

And so was born the Halloween Box.

Douglas is trying to attach more traditions to Halloween. In addition to giving away Halloween Boxes, he’s also trying to get more folks to tell scary stories at Halloween time. Last year, he got a few ghoulish goblins together to tell tales with scary sounds, and then he played them on his Nightmare365 podcast and on his YouTube channel. You would be able to listen to these stories, except Douglas took them down because he's endlessly revamping his podcast and YouTube channel. Blow him up at 732-660-8893. Luckily you can hear Picarella’s tale, "High Beams," from Alvin Schwartz's "Scary Stories to Tell in the Dark" right here:

“I love the idea of having more fun traditions associated with Halloween,” Picarella said. “Trick-or-treating, costume parties, and watching scary movies are all great. But I really like the idea of telling scary stories again. The last couple years, Matt also sent out Halloween cards. I like that, too. It really adds to the fun of the season.”

Picarella added that Douglas is probably the last living being in this world or the monster world to actually send postcards still. (For the youth of the world, postcards are pictures you can’t text. They’re images printed on cardstock, found on rusty metal rotating racks in tourist gift shops of notable landmarks.)

So back to Halloween Boxes -- the best way to go about putting together a Halloween Box is to first select a victim who would most benefit from Halloween goodies. Then choose a number of spooky items to give such as a Halloween advent calendar, plastic vampire teeth, spider rings, Halloween stickers and decorations, Halloween candy, and maybe something a little extra, like a Tasmanian Devil, all of which can be found in any of the 13 deadly districts of Transylveinya. Next, smash these items into a box and have that box tied shut. Finally, have the box sent Dead-Ex (they’re the only postal service that’ll send a Tasmanian Devil).

Then wait for the phone to ring and the screaming to begin.

So don’t just use your three hands to help yourself this Halloween season. Your paws can do much more than grab victims, tie them up and claw them to pieces. They can also give the gift that keeps on living: Halloween Boxes with a little (or a lotta) something extra special inside!

Posted by Jack-o'-Lantern Press at 5:44 PM No comments:

Monster Mondays are back! 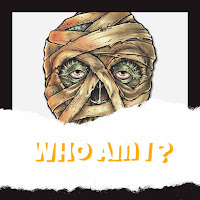 The guys from the Jack-o’-Lantern Press Podcast finally got up off their keesters and are back with a Monster Mondays episode on the show, this one on a definite loser -- I mean a definite classic monster.

Sure, maybe this particular monster doesn’t move the fastest, doesn’t do much to scare anyone . . . at all. He basically just moans and groans like a dummy. I’m sure there’s a totally good reason why, then, that Michael Picarella and Tom Picarella chose to do an entire episode -- the longest Monster Monday episode to date -- on this idiot.

Click HERE to hear the show. Then tell us what you think by emailing us at JackoLanternPress@gmail.com or by calling our Pumpkin Hotline at 323-761-0276.

Oh, and let’s all pay close attention to the section in the episode (at around 9 minutes and 48 seconds into the show) where Greg Douglas from the Nightmare365 podcast promises (crosses his heart and hopes to die) to purchase and bring this glorious costume to life this Halloween: 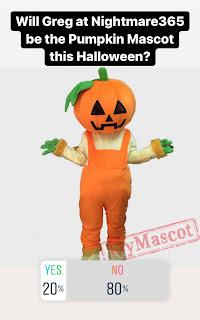 I know I speak for all of you Halloweeniacs out there when I say that the Halloween world not only wants this, it needs it.