Podcast shares gift ideas for your lists to Franken Claws 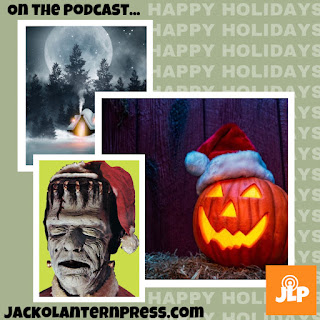 I’ll keep this short ... Have a happy horrific holiday with this special podcast HERE about me from the Jack-o’Lantern Press Podcast! Send me your lists. And don’t forget to put out those Sant-o’-lanterns.

Posted by Jack-o'-Lantern Press at 1:06 PM No comments:

Give yourself the bird 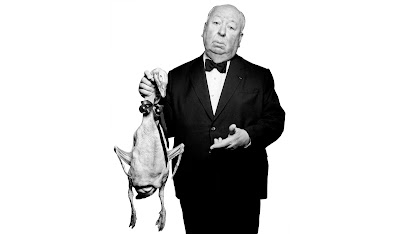 Let’s face it, Thanksgiving places heavy emphasis on a bird. And filmmaker Alfred Hitchcock cooked up one heck of a film about birds — “The Birds” from 1963.

It’s only fitting, then, that Thanksgiving and Hitch come together this month for a movie marathon to fill your appetite for a tasty helping of mystery and murder.

Those interested in marathoning Hitchcock films this Thanksgiving season can do so on the day or throughout a number of days leading up to Thanksgiving. 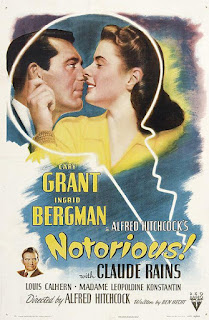 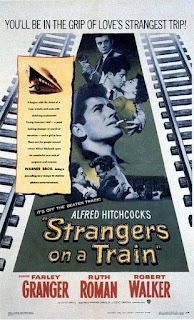 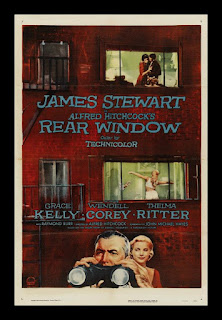 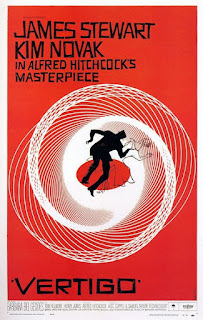 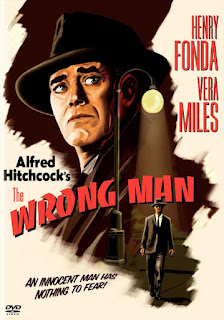 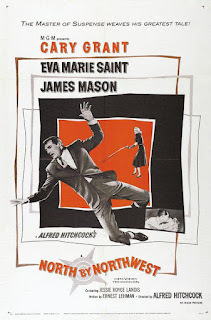 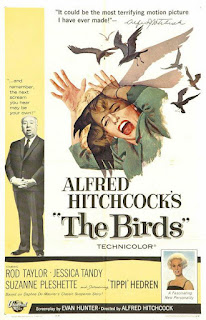 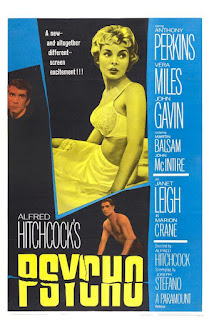 So, there you have it. Bon appétit. Mangia!

For more about Hitch for Thanksgiving and other fun freaky traditions for all you creepy kooks out there looking to infuse all your holidays with monsters and Halloween, check out the “Jack-o'-Lantern Press Podcast” Thanksgiving episodes linked below:

And look for a special helping of Thanksgiving horror coming soon to the podcast ...

We at hope all you ghouls and goblins out there aren’t ready for the big night. We love the surprises!

To get your day started with a Boo!, be sure to play the Halloween episode of The Weird Network's "Halloweeniacs" podcast HERE, where Mike and Tom from Jack-o’-Lantern Press, and Matt and Greg from Nightmare365 talk about Halloween haunts, attractions and events. 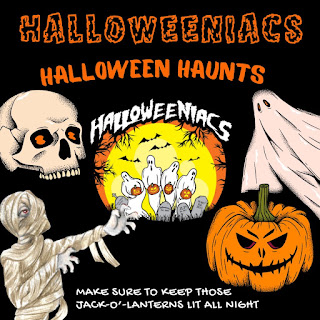 The guys explore traditional haunts — click on the following links for some best-of lists that they discuss, rate and tear apart:

-The 14 Most Terrifying Haunted Attractions

Then they debate extreme haunts — click HERE to watch “Haunters: The Art of the Scare,” a 2017 documentary about haunters across America, featuring some of the most extreme haunted houses ever created.

And the guys also touch on the family-friendly kind of Halloween events that are becoming more popular. This month, Matt and Greg offered a video through Haunt o’ Ween in New Jersey on their Nightmare365 YouTube channel. Greg eats a mean ice cream sandwich. 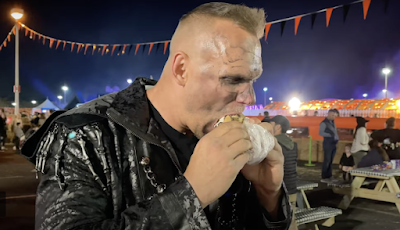 Other family-friendly Halloween events include Carved at Descanso Gardens and Nights of the Jack in Southern California. The guys don’t talk about too many of these types of events, but they’re certainly worth checking out and considering — this is the last night of the year to try.

Did everyone — and thing — have a happy Mischief Night? The Halloweeniacs launched their YouTube Channel yesterday with an animated Mischief Night short. Check it out HERE, and be sure to subscribe and stay tuned for new content coming soon. 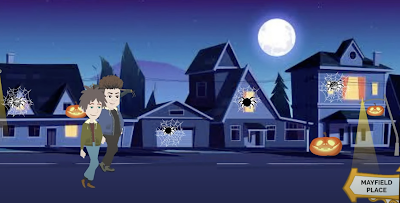 And if you haven’t been up to date on the scary stories from the Scary Story Society YouTube channel, there’s a really fun one that just dropped, one that you can use at Halloween parties tonight. Click HERE to watch.

Now it’s about time … The clock is ticking …

Posted by Jack-o'-Lantern Press at 9:15 AM No comments: 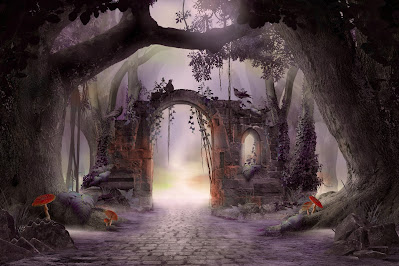 Monsters, ghouls and goblins were more than excited to get the Halloween season started last night, according to Witches Meadow sorceresses.

Bewitched witches opened Transylveinya’s Great Portals right at midnight at Spell Willows in Transylveinya’s Witches Meadow during The Witching Hour Fest-evil, the annual event that’s highlighted by spells and chants that take place between 12 and 1 a.m. every July 31st (technically Aug. 1) in order to open up the pathway between now and Oct. 31 from the monster universe to the human world.

“Haunters from our side were stomping, clawing and flying over each other to get to the other side and begin preparations for Halloween,” said Hagatha, one of the witches who helped organize the evening’s opening ceremonies. “These creeps were so eager to slip inside human closets, under their beds and into the shadows that many forgot their own purpose in life — or afterlife.”

The Great Pumpkin bypassed pretty much every sincere pumpkin patch.

Gorgons, with locked focus on where they were headed, turned no one to stone.

Deadly spiders got in no one’s hair.

Evil geniuses set aside current plans to take over the world.

Werewolves forgot to howl at the full moon.

Terminator machines forgot to say they’d be back.

“Yup, it’s unsafe to say that the monsters of Halloween are headed to the human world with a vengeance,” Hagatha said. “Humans, beware. Halloween season is here!”

Posted by Jack-o'-Lantern Press at 1:02 PM No comments:

‘Halloweeniacs’ podcast will get you into the Halloween mood 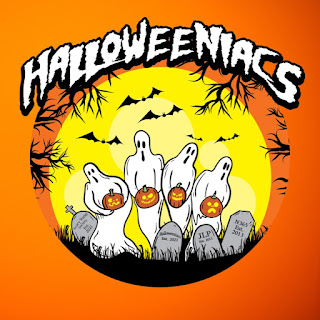 “Tom and I love to hang out with Matt and Greg from Nightmare365.com every 31st of every month that has a 31st and talk Halloween,” said JacoLanternPress.com’s Michael Picarella. “This was the first show we did together on the eve of The Witching Hour. Well, I take that back. Greg wasn’t there with us when we recorded this episode. He was still pretty beat from his visit yesterday as Sam from “Trick ‘r Treat” at the grand opening of this year’s Spirit Halloween flagship store in Egg Harbor Township, New Jersey. He was sharing the Halloween spirit and having a playdate with those he could converse with best.” 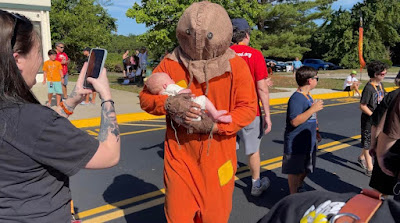 Nevertheless, in this podcast episode of "Halloweeniacs" (click here for episode 99), Mike, Tom and Matt talk about the official beginning of the Halloween season that will take place tonight, and what they’ve done, what they do, and what they will do to properly get into the mood for All Hallows’ Eve.

Join them in the discussion. We promise there will be plenty of pain and agony — essentially a great time!

And let the guys know what you think are the best ways to get into the spirit. Email the podcast here or call the show’s Pumpkin Hotline at 323-762-0276.

And now, what are you waiting for? It’s Halloween time!

Posted by Jack-o'-Lantern Press at 9:47 AM No comments:

JLP Podcast takes a spin in some haunted vehicles 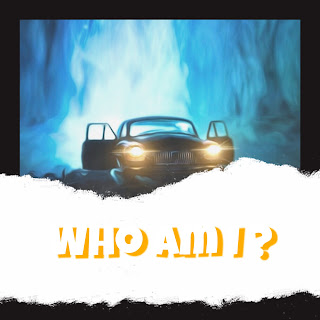 Choose the haunted vehicle of your choice, climb inside and hold on tight. You’ve got the pink slip. The vehicle’s got you!

The Jack-o’-Lantern Press Podcast celebrates this Monster Monday with episode 98 right here about the haunted vehicle.

“During the show,” said podcast co-host Michael Picarella in a recent interview with JLP, “my brother Tom and I take a look at a list of scary cars from BloodyDisgusting.com, and you can play along with us as we decide if he and I agree with this list or if the list is seriously missing some key scary vehicles.”

Join Mike and Tom on the podcast as they board Doombuggies and explore and test drive some of the coolest haunted vehicles to hit the road and beyond. 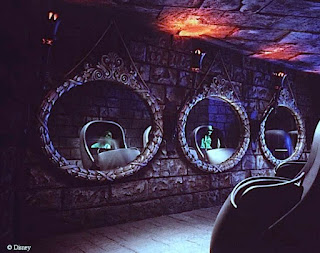 Oh, and if you’re into Doombuggies, check out this brief history of the ride vehicles right here on Doombuggies.com.

Before Mike gets into his history, Tom brings up a Haunted Mansion coffee mug he’s drinking from, though, in the show, it almost sounds like he’s drinking from an “Alice in Wonderland” Mad Hatter cup. Here’s what he’s really talking about: 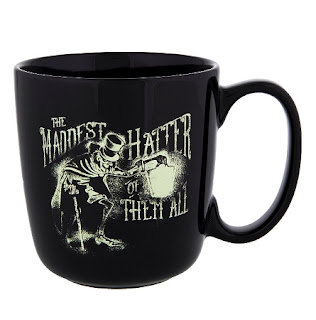 As for history, Mike covers vehicles that receive their curses mysteriously…

Then there are those, he says, where extraterrestrial forces provide the terror…

He also shares how some vehicles just make drivers go mad, as seen in this classic Goofy cartoon you watch here on YouTube called “Motor Mania”... 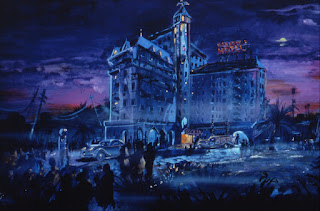 Mike goes into a more thorough history of the haunted vehicle as he shares how the one in R.L. Stine’s book “The Haunted Car” came to be. Check out “The Haunted Car” here and also the “Goosebumps Monster Survival Guide” that Mike reads from in this part of the show.

Tom talks about strengths and weaknesses of various haunted vehicles, and he covers the surface on those vehicles where the horror is engineered, which he pulls from the following books by author and roboticist Daniel H. Wilson:

- “How to Survive a Robot Uprising”

There’s a list of types of haunted vehicles Tom gives during the podcast that could probably use some more exploration. He combined various lists for his list, which causes a bit of confusion in the show and forces an intermission — it’s reason for some intermission music, anyway. Here’s a link to a page that has a lot of that information that Tom shares.

Oh, and for that history of James Dean's Porsche 550 Spyder that Tom mentions, check out this article about it.

Mike lists more movies, TV shows and books than he normally does on these Monster Mondays. Here are the movies he mentions (with links to where you can stream them), some suggested by sponsor CJ Brezensky from the “Found This” YouTube channel:

Here are the books Mike mentions:

BONUS CONTENT: Mike forgot to bring up a haunted vehicle from a cartoon worth mentioning. Back in 1968, Hanna-Barbera created the cartoon "Wacky Races," totally worth digging up. Each cartoon was a race between 11 race-car teams, including the Gruesome Twosome in the Creepy Coupe. 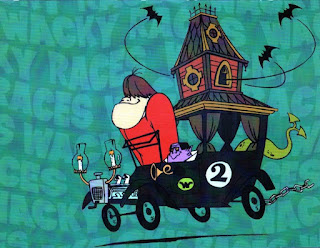 You can find out more about the Coupe in this article about all 11 vehicles in the show. And you can also purchase some cool Creepy Coupe merch — the car here or a coffee mug here or cool shirt here.

But back to the podcast: Mike also talks about where in Transylveinya listeners are most likely gonna find haunted vehicles. Listen to what he says, then find out how to get to those locales by first purchasing “Transylveinya Traveler” from JackoLanternPress.com or Amazon. 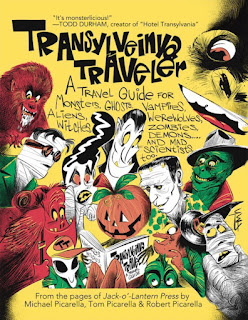 To end the show, Mike and Tom share a few cool “haunted vehicle” items you can buy. There’s “The Car” toy car here. 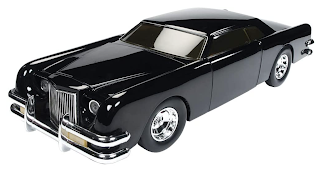 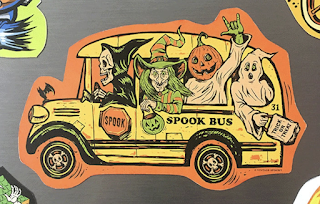 And here’s the Ghostbuster’s Lego kit Tom talks about. 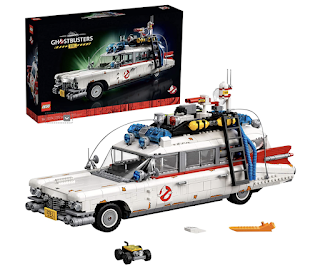 Overall, this is a longer Monster Mondays episode than usual, but, like the haunted vehicles Mike and Tom talk about, it keeps on moving.

Sponsors of this show include CJ Brezensky’s YouTube channel “Found This” right here and, of course, Nightmare365.com.

To add to the conversation, go to the Monster Revolution Facebook group page and tell us what you think. Don’t be shy. The monster revolution is upon us! In fact, that vehicle you’re sitting in should get you there in no time, so step on it.
Posted by Jack-o'-Lantern Press at 10:56 AM 2 comments: