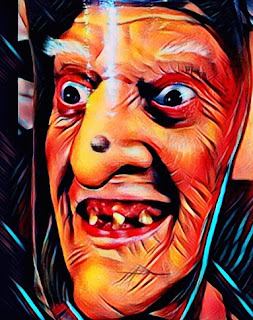 WITCHES MEADOW -- It’s been a busy night as Jack-o’-Lantern Press journalists have been preparing for the 2017 season of monster news and entertainment. They’re also getting ready for a three-month journey through the 13 districts of Transyl-vein-ia as research for an upcoming guidebook of the land called “The Transyl-vein-ia Traveler: A Travel Guide For Monsters, Ghosts, Vampires, Aliens, Werewolves, Witches, Zombies, Demons And Mad Scientists, Too.”

Transyl-vein-ia’s Witches Meadow is “the” hot spot for the Witching Hour at midnight, and our reporters have been there to catch the action.

“We seen monster folks show’n’ up at the Black Cauldron Encampment as early as dawn (ribbit) on Saturday for a good spot ‘n the mud,” said a big ugly toad. “They don’t wanna miss (ribbit) the big gala. I’m glad I live ‘n the mud. I was born with a (ribbit) good seat fer the show. (ribbit)”

The “big gala” that the big ugly toad was referring to is, of course, the Witching Hour, where witches will cast their spell to open the portals for monsters to enter and cross into the human world during the Halloween season.

“We arrived this evening to a very packed Witches Meadow,” said reporter Vin “Skull” Eek. “We checked out the witches booths where you could pick up brooms, spells, tails of rats and other fun things like that, then we sat down with some of the sorceresses to perform spells tonight and talked about a variety of topics with them, including the Orange Witch and her first appearance in Witching Hour attire alongside her new fellow witch mates. It’s gonna be spellbinding.”

Earlier this month, the Orange Witch announced that she’d leave her little cauldron at the Hooked Nose Cackle Factory, where she did stand-up comedy for 100 years, to perform on a much bigger stage tonight for the Witching Hour. Critics called her the Kevin Durant of the witching game, joining a team of winners instead of building a success of her own at the Factory. Unfortunately (and not in a good way), attendance has been down at the Factory since the Blue Witch cast an evil spell on stage late last year and “bombed.”

“I’m ready to start a new chapter in my life,” the Orange Witch said regarding her move to center stage this evening. “I just want to do what I do best, and that’s cast wicked spells that are doom for the whole family.”

Much of the excitement this evening is for the new season of Jack-o’-Lantern Press material and the trip reporters will take to research the upcoming travel guide.

“We’re basically going to spend a week in each of the 13 Transyl-vein-ia districts up until Halloween,” Eek said, “speaking and howling with the locals, and pulling together all our research to create a guidebook for those who either want to travel to Transyl-vein-ia or those who live here but have never really stepped outside their castle or swamp or cave to see the world around them. Each week, Monday through Friday, we’ll report on some of what we discover. Some stuff will only be on the Jack-o’-Lantern Press blog, and some stuff will only appear in the new book. Some stuff will be in both publications. And some stuff we’ll just leave out.”

But in the meantime, everyone and everything is focused on the festivities to take place tonight. With everyone in bad spirits (and with bad spirits swirling all about), reporter ghouls and goblins with time (and victims) to kill took the opportunity to show off their goofy side at the Witches Unsocial Media Station set up in the Encampment.

With selfie sticks, cameras, some monster bobbleheads and a stack of oversized plastic emojis, the Jack-o’-Lantern Press zombie, alien and demon reporters had some fun by flooding unsocial media with cursed pictures and videos that, after seeing, will kill you seven days later. Like we said, they were showing off their goofy side.

So check out our blog Monday through Friday, August through Halloween, as we bring you monster news and entertainment from Transyl-vein-ia in preparation for Halloween 2017.