‘Elevator Game’ takes you down 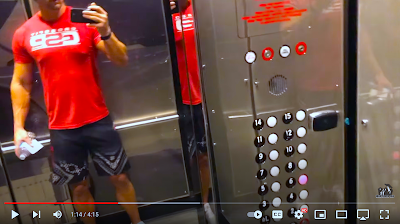 Why would any human being with any care for life want to play a game that offers even the slightest chance of not surviving by the end? Games are supposed to be fun. Though, fear can be fun, so long as you come out clean. But if a game can truly threaten your life, offering no guarantees that you’ll walk away with your life by the end of said game (like when you walk out of a movie theater after watching a horror movie or when you step off a roller coaster that you just survived), then it’s the person who must want to die that can be so willing to play.

A young man (we’ll just call him Frederick, if that’s OK with you) was testing that premise. He’d come across a video on the Nightmare365 YouTube channel called “Playing the Elevator Game.” It was a video that algorithmically presented itself to Frederick because he’d been watching dark and macabre content all evening, including videos of people spending the night in haunted cemeteries and those in their own bathrooms, turning off the lights and repeating the words “Bloody Mary” in a type of chanting. Frederick had never bought into the Bloody Mary nonsense or the Ouija board ridiculousness (in real life, who really does?), but the Elevator Game, which, come on, folks, seems no different, caught his attention.

So, here are the rules of the “Elevator Game” as Nightmare365's Matt Douglas explains them in the video on his video with his brother Greg: “You get into the elevator on the first floor. You press four. When you reach the fourth floor, you don’t get off.”

Matt is explaining all this over video of Greg recording himself actually doing this in a Los Angeles hotel elevator. Once the doors open on the fourth floor, Greg follows the next rule of the game -- he hits the button for floor two on the panel. The doors close, the elevator presumably moves down two floors.

“When you reach the second floor,” Matt continues in the video, but interrupts himself to comment on Greg’s response in the video: “Oooo, look at your face.”

Greg says he’s nervous, but not for what might await him at the end of the game, rather for the awkward scenario that might confront him if the elevator doors open and someone goes to get on but runs into Greg’s camera phone, which would be in this poor individual’s face.

Instead, the doors open to an empty second floor.

“Alright, so once you get to the second floor,” Matt continues, “you press (the button for) the sixth floor.”

At this point in the video, we still don’t know exactly what is supposed to happen by following these rules of the Elevator Game (unless you’ve done your homework). But we continue. The doors open to an empty sixth floor, Greg punches the button for floor two.

“This is where it can get spooky for people,” Matt says in the video.

As the elevator seemingly rises up toward the top of the building, Greg finally gives us a hint of what’s to be expected from this game: “I thought she was gonna come in right here.”

It’s at this point in the video that we learn from Matt what to expect from the Elevator Game if you do it properly: “When you reach the fifth floor, a girl will come in. The woman is not human. Don’t talk to her, don’t look at the girl. If you do, she will take you away. So now ... the fifth floor ...”

The elevator descends, Greg’s reflection seen in the shiny metallic doors. He doesn’t appear to be nervous. The digital read-out near the button panel shows the floors skipping by: 8, 7, 6 ...

The doors open, Matt kinda screams in the video, but in a mocking way at the empty space on the fifth floor.

But if you were to play this game and there was a girl on that fifth floor at this point, you would then, as Matt instructs, not talk to her, not look at her.

You would next press the button for the first floor. Two things might happen then: If the elevator descends to the first floor, it’s best you exit the elevator and never look back. But if the elevator goes up, well then, you’ve just gained access to the “Other World.” When you reach the 10th floor, you’d know you’re no longer, as they say, in Kansas anymore. According to some players, if you look out the windows, you might even see a red cross in the distance.

But what does any of that mean, this girl, this visit to the “Other World,” and a red cross? Frederick wondered as he watched the Nightmare365 video. To him, experiencing any of that might mean his own death. But the video, as you would expect, did not capture any such images and, as of this writing, Matt and Greg are just fine, living their best lives in New Jersey state.

Frederick read through the video comments to see what people were saying, perhaps to verify that Greg had carried out the steps properly in the video or to see if others had tried the game and succeeded in “crossing over.” One such individual wrote several months prior in the comments: “I saw the girl in your video.”

But the video, for the record, showed no girl in the video. There is, once Greg lands back on the first floor at the end of the game, a woman off to the side mopping the floor, but nothing more than that.

He clicked on the “I saw the girl in your video” comment and went to that YouTuber’s channel. There’d been no activity on his page since his comment on the Nightmare365 “Elevator Game” video.

Frederick did a Google search of the guy, found his other social media pages. No activity since posting the YouTube comment. Frederick searched for the guy’s name in the news. Nothing.

Growing tired, Frederick called it a night, and that was that for his curiosity with the Elevator Game.

He clicked on the alert and found himself in the video’s comment section. There was no comment from Frederick there, to be certain, but he saw a new comment for the video from some other user: “I also saw the girl in your video.”

This comment was posted mere minutes after the other comment, which, again, had been several months prior. But Frederick read all the comments previously and he did not see this one. According to its date, it would have been there.

Frederick searched online for the user and, like the other user, found that this one had also not posted anything anywhere since posting the comment on the Nightmare365 “Elevator Game” video. He searched for this individual’s name in the news as well. Nothing.

That’s when Frederick got another YouTube alert on his phone indicating that someone had responded to his comment on Nightmare365’s “Elevator Game” video. This comment, again, was obviously not a response to Frederick because Frederick never left a comment, but it had just been posted seconds ago. And it was: “I saw the girl in the video. And I saw the ‘Other World.’ And I saw the cross. Get me out. GET ME OUT!”

Haha! Lame, Frederick thought. He searched the user online and sent her a message:

"Emily, I saw your message. You’re probably joking, lol, but did you really see a girl in the video? Where? I’ve watched the thing many times. I know it’s a little shaky, but I went frame by frame. Was it the woman mopping the floor that you saw? I’m hoping you’re not just messing."

Frederick sat glued to his phone (as if he wasn’t glued to it before) and waited, hoping for an immediate response from this "Emily" girl. And then, just when he was about to give up ... Yeah, no, she didn’t respond right away.

The Tommy’s world-famous quarter-pound chili cheeseburger Frederick was eating was to die for. He hadn’t thought about the message he sent Emily for a while now, when he took a giant bite out of his burger and saw an alert from Emily’s account on his phone, which was resting next to his chili cheese fries:

"Frederick, hi, this is Emily’s sister. I just saw your message and I’m sorry to tell you that Emily has passed. I don’t know how close you two were, but just so you know, we already held the services."

Frederick set his tasty burger down and responded to Emily’s sister, asking what had happened. After a few messages back and forth, Frederick learned that Emily’s heart had stopped. She had been on her computer watching a video. The time of death was, after Frederick checked her comment on the Nightmare365 video, moments after she posted that.

This threw Frederick into a deeper dive for the other two YouTubers’ identities (the two who had posted about seeing the girl in the “Elevator Game” video). And when his search was complete, Frederick went back to his burger and fries, which were now cold. But he ate them and enjoyed them, probably more now than when they were warm.

Then he went back to his phone, back to the Nightmare365 “Elevator Game” video, and he watched it over again, for the who-knows-how-many-times time.

“Do you like scary and spooky stuff?” Matt asks at the beginning of the video. “Well, then you came to the right place. Because we’re talking about ...”

Greg finishes the sentence with: “The Elevator Game.”

Until that last time Greg gets to the fifth floor. And those doors open. And there’s a young woman standing right there. How could Frederick have missed her in his previous viewings? He’d missed her because she was not there!

The video continues with Matt’s mocking scream. Greg still says, “Nothing” in the video, as if Matt and Greg couldn’t see that woman standing right there. Greg, as he did all the other times Frederick watched the video, takes the elevator down, down, down to the first floor. But this time in the video, the doors open to a darkened 10th floor, another world. The “Other World.”

That’s when Frederick did what the others had done: He posted a comment to the video: “Yes, I saw the girl. I finally saw the girl.”

Emily’s death was without warning. The other two YouTubers had actually left notes before their passing, which Frederick had learned about when he researched them further.

The first guy wrote that the “Elevator Game” was not a curiosity, but rather an obligation he’d finally made good on. The second guy had written that watching the video was a debt he had to settle. Frederick never got the chance to write a note of his own. But he lay there, breathless, with a look of relief on his frozen, dead face. There are those who believe we all must pay for our sins. That guilt is strong. So strong that it makes some folks even willing to play a game that could take their lives in the end.

Anyone out there looking for a shot at the Elevator Game? Click HERE to watch now.
Posted by Jack-o'-Lantern Press at 9:44 PM